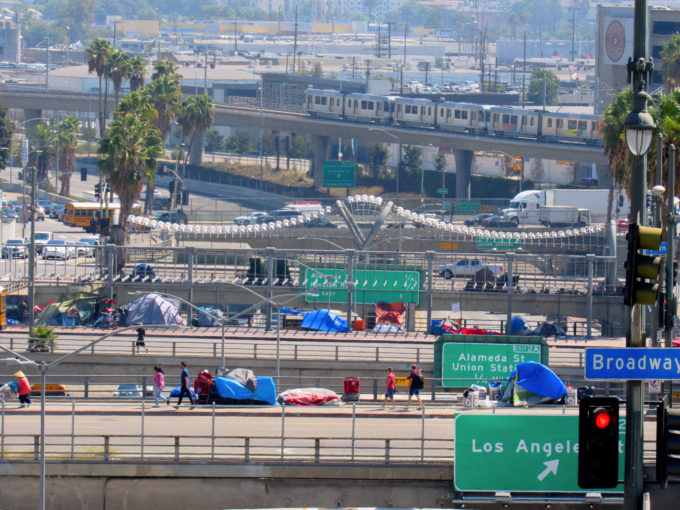 Los Angeles– Sept. 24, 2019–Last week, numerous media outlets reported that President Donald J. Trump, during a visit to the Golden State, said he wanted to disburse homeless camps like the one shown above. This photo was taken from the Broadway overpass spanning the Hollywood Freeway near downtown. On several overpasses to the east, tents and tarps form colorful strings spanning the river of cars.

The Los Angeles Times quoted the President of the United States as saying,

“We have people living in our … best highways, our best streets, our best entrances to buildings … where people in those buildings pay tremendous taxes, where they went to those locations because of the prestige,” he said. “In many cases, they came from other countries and they moved to Los Angeles or they moved to San Francisco because of the prestige of the city, and all of a sudden they have tents. Hundreds and hundreds of tents and people living at the entrance to their office building. And they want to leave. And the people of San Francisco are fed up, and the people of Los Angeles are fed up.”

The 101 Freeway probably could not qualify as one of the city’s “best,” however. The ageing concrete ribbon cuts a swath through some of the oldest and densest sections of the city. The pavement is uneven in parts. Entrance and exit ramps are short, reflecting the lack of space for interchanges. Clusters of houses clutch steep hillsides overlooking the 8 lanes of traffic and motorists navigating the freeway’s dips and curves get a continuously changing up-close view of some of the metropolis’s most colorful neighborhoods.