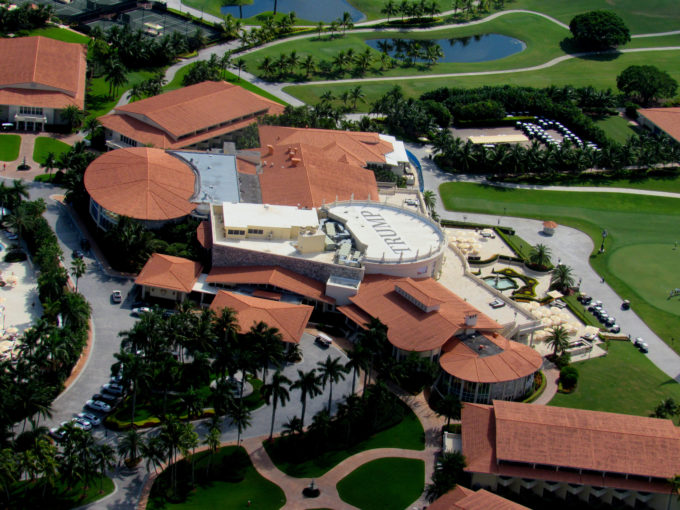 A whirl through the pages of Tuesday’s national newspapers of a late August day makes one feel rather hot and a little worried. Even by today’s tumultuous standards, the news is starting to sound —  I hesitate — urgent. And it’s hard to keep cool when the biggest stories — except the one about the Group of Seven Nations summit in France — come from around the Equator; from the northeast of India on Asia’s sultry subcontinent; from humid Hong Kong; swampy Washington, D.C.; and from the arid Southwest of the United States.

Perhaps the story likely to make you the hottest under the collar — though it is out of temperate France — is the one about President Donald Trump inviting the G-7  to his Miami hangout for their next get-together. Florida’s biggest city definitely is a hot and muggy place, but there’s plenty of air conditioning at the Trump National Doral Miami, which by the way, was built on reclaimed Everglades swamp land. Who says Trump doesn’t have any experience draining swamps?

More about that later. First, to warm you up for the punch, let’s do a hot take on today’s steamy news from around the globe, so plug in your fan and turn it on. I promise, this blog post will reward your endurance with “the big one” if you stay tuned.

The ‘Lungs of the World’ Are on Fire

Brazil’s Amazon rain forests are burning on an unprecedented scale because the country’s new populist president, Jair Bolsonaro, encouraged farmers to set it ablaze in order to grow more food. He mocked France’s offer of $20 million to help fight the fires as colonialist thinking and lashed out at the world, saying that the world thinks Brazil cannot be a good steward of its own land. (Well?)

Jakarta, home to 10 million people and the capital of Indonesia sits on the world’s most populous island. The Indonesian government decided it is a lousy place to conduct government business because of the usual big-city problems, including congestion. Moreover, the metropolis is sinking. Indonesian officials unveiled a plan to move the capital to a jungle in Borneo, much like Brazil moved its capital to a planned city in the middle of the Amazon, Brasília.

In other news, moving a national capital under the best of circumstances is a monstrous upheaval and does not always go well.

Millions of people in India’s province of Assam may be deported after the government there subjected the state’s nearly 31 million residents to a citizenship test aimed at uncovering their ancestral history. Accounts say the crackdown is aimed at people said to be in India illegally, mostly from neighboring Bangladesh.

If residents can prove their provenance, they can be on a National Register of Citizens and be allowed to stay.

The Post said that an “earlier, provisional version of the citizenship list” for Assam excluded 4.1 million people. Residents were required to produce ancestral documents dating back decades to prove links to their parents, and according to the Post story, “Human rights groups say the exercise has proved impossible for many people to navigate, particularly the poor and uneducated.”

Tuesday’s high in Guwahati, the province’s largest city, was 98° with 84% humidity.

Unless you’ve been hiding out in an air-conditioned cave without WiFi lately, you know that an estimated 2 million people marched in the streets of the former British colony, now part of China, over fears that Beijing is not honoring the “One Country, Two Systems” promise that was meant to protect the tiny but highly populous region’s cherished freedoms, like the right to vote and to have a free press.

Every day brings fresh news of street demonstrations while China masses tanks near the border city of Shenzhen. And every day seems to bring more comparisons to Tiananmen Square.

Moving about 2,453 miles north of the Equator, Johnson & Johnson was ordered to pay $576 million by an Oklahoma judge for the drugmaker’s role in that state’s opioid epidemic.

J&J has been a household name since the middle of the 20th Century and dates back to 1886.

The order came from the Cleveland County District Court in Norman, Okla., where the high temperature was 99° the day the ruling was rendered.

The Sooner State, by the way, is home to climate change skeptic Sen. James Inhofe (R-Okla.).

Heat is killing more people in the Southwest, the U.S. Center for Disease Control and Prevention, says. The CDC is not talking about migrants crossing the desert near the U.S.-Mexico border.

Since 2014, the annual number of deaths due to heat exposure in the Grand Canyon State tripled, The New York Times reported, and in Nevada they rose almost fivefold during that period. Most of the deaths occurred in the Phoenix and Las Vegas areas.

Summer is always too hot in swampy Washington, D.C.

This summer, the U.S. Justice Department is reportedly close to deciding whether to bring criminal charges against former FBI acting director Andrew McCabe for allegedly lying to Congress over an investigation into former Secretary of State Hillary Clinton’s family foundation.

The high in the nation’s capital, where this blog is being written, was a mercifully cool 79°.

Things Not Going So Hot with Trade War

The trade war with China is not going so well. U.S. President Donald Trump spent the weekend waging what appeared to be an impulsive Twitter-driven skirmish against China in his trade war with the world’s No. 2 economy while meeting with leaders of the Group of Seven major industrial nations at a summit in France. The G-7 meeting disbanded without anyone coming to any agreement — on anything.

Not that there’s nothing on which the world’s seven richest countries need to talk about (see all of the above).

And Now, The Big One

After ignoring all of the unpleasant things described above, the President did manage to slip in a plug for one of his properties by inviting the gang to meet there for its next summit. That’s right, the President of the United States — who has not divested himself of his namesake company’s real estate portfolio — wants the other six leaders of the Group of Seven*, along with their retinues, to check into the Doral, which his company owns.

According to Vox, Trump “first raised the idea of hosting next year’s meeting at his Doral, Fla.-based golf result during a bilateral meeting with German Chancellor Angela Merkel on Monday, the last day of this year’s G-7 in France, saying of Trump Doral that ‘we haven’t found anything that could even come close to competing with it, especially when you look at the location right next to the airport’ in Miami.”

Everyone knows Trump lies daily. That’s not an opinion. It’s doubtful they did much looking around for alternatives.

So you see, if you swam through the superheated waters of today’s news, it might seem more than ever before that all the elements are moving into place to set the stage for a perfect, terrifying storm:

And does the so-called Leader of the Free World acknowledge any of this while meeting with the other G-7 leaders? No. Trump’s talking points were more along the lines of: “My golf resort has ample parking, the best steaks and is convenient to Miami International Airport. If you book now, ask for the special G-7 (or G-8?) room rate.”*

*Not a verbatim quote.

All of that, plus Trump proposed to the G-7 that Russia be “readmitted” to the elite group (and by logical extension, that the G-7 be made G-8 again). It’s too much for one article. But it does prompt the question, why is he once again carrying Vladimir Putin’s water?

One possible explanation: Prime Minister Putin is likely to require many luxury hotel rooms for his entourage, increasing the REVPAR (Hospitalityspeak for Revenue Per Available Room) at the Trump Doral Resort, a luxury hotel. While still illegal, that would not be as bad as the thing many people might be whispering (again): that he is Putin’s puppet.

The sky may not be falling, but I think Rome is burning.

There is nobody in charge, and it’s getting scary.

One thought on “Rome Is Burning, So Come On Down to Doral!”