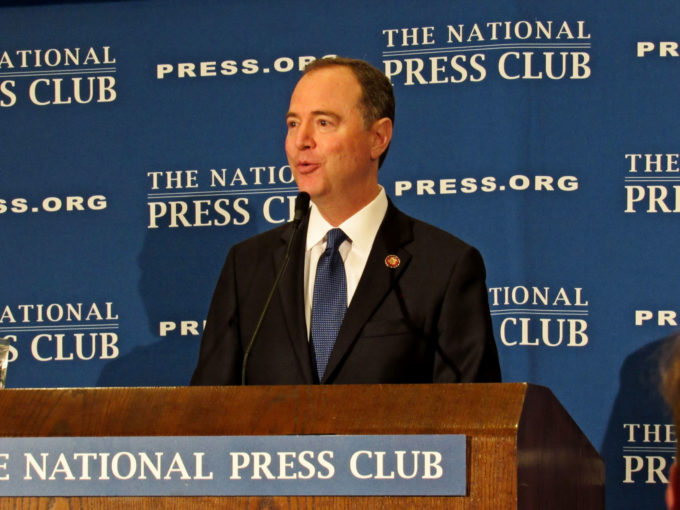 June 21, 2019, Washington, D.C. — The Chairman of the House Intelligence Committee, Adam Schiff, D-Calif., dismissed any doubt that last week’s attacks on two oil tankers in the Gulf of Oman were the work of Iran, and said despite demands for more evidence from some United States allies, the matter is “not an intelligence matter.”

“I have to say, as someone who spends so much of the time working on intelligence and working with intelligence agencies, I’m astonished at how much discussion of Iran has revolved lately around intelligence,” Schiff said to an audience of reporters and members of the public at the National Press Club in Washington, D.C., Wednesday.

The statement is somewhat surprising because two of America’s closest allies — Germany and Japan — have in recent days questioned the veracity of grainy video footage released by U.S. intelligence services that purport to show Iranian forces removing an unexploded mine from the hull of one of two ships attacked last week in the Strait of Hormuz, putting the quality of the intelligence at the center of debate and perhaps more problematic, calling into question the credibility of President Donald Trump in the eyes of American allies. Schiff stands out, even among Democrats, as a vocal and consistent critic of Trump.

“To me, the issues raised by Iran are really not intelligence issues,” Schiff said. “I think there’s no question about Iran’s responsibility for the attacks on shipping, and I don’t really think that the heart of the concern that our allies have is over the quality of intelligence, which is very strong. I think the problem is really that we [ought] to be surprised that we didn’t find ourselves in this situation, that this was eminently predictable.”

And that is where Schiff faults the Trump administration for walking away from the nuclear treaty with Iran. The intelligence, in fact, “could have [warned] and did warn us that exactly these kinds of increased risks of conflict with Iran” would result from Trump’s decision to walk away from the nuclear agreement that the previous White House, along with U.S. allies, entered with Iran,” he said.

And the problem with that, Schiff says, is that the U.S. is stirring up doubts among its allies as it faces down Iran — at a time when allies’ buy-in is crucial. “This needs to be done in concert with our allies and I think you are seeing the dangers of a policy of going it alone, of castigating and alienating our allies — and when we need our allies, as we do right now, they’re nowhere to be found,” he said.

“We withdrew from a nuclear agreement that Iran was complying with, which is problematic in many ways:  problematic because Iran was compliant; problematic because there was no alternative to the agreement when we left it. Problematic, too, because … what reason now do other nations have to believe that any [agreement] will be maintained and upheld beyond the life of that presidency? It used to be the point of view that when the United States committed to an agreement, the United States was committed to [the agreement], not simply the president,” Schiff said.

“But you can imagine the difficulty of negotiating future agreements, be it with friend or foe, [when they] believe we cannot be relied on the beyond the length of that presidency,” he added. “Nonetheless, we left the agreement, we reimposed our sanctions and, not content to leave on our own and impose our own sanctions, essentially, we have also sought [to convince our allies] to leave the agreement and to impose their own sanctions,” Schiff said.

Showing a go-it-alone stance has only served to isolate the U.S., Schiff said. “Of course this has not isolated Iran so much as it has isolated Americans from our allies. And I think this is the difficulty, we’re [faced with] persuading our allies about the intelligence. It’s not really about intelligence. Rather, I think is that our allies warned us that this is exactly the position that we’d be in,” he said.

But retired Cmdr. Kirk Lippold, the commanding officer of the USS Cole in 2000, when it was hit by a deadly suicide bomber attack while in port in Aden, Yemen, has been following the latest events in the Gulf, and does not agree with Schiff’s assessment. “While many want more public support for the U.S., so we don’t appear to be ‘going it alone,’ the reality is that the U.S. is quietly building a solid coalition that, if Iran chooses to again engage in attacks in the future, the response will be met more forcefully with an eye toward eliminating any capability of Iran to block the Strait of Hormuz and interfere with the transit of ships under international law,” Lippold said.

“While our European allies who signed on to the [Joint Comprehensive Plan of Action, or JCPA] continue to publicly press for the U.S. to adhere to its provisions, they also know that Iran is engaging in actions that will ultimately free it from the last vestiges of compliance and allow their nuclear weapons program to resume in earnest,” Lippold wrote in an email Tuesday.

“Additionally, our allies in the Gulf, led by Saudi Arabia, are being told that they must be willing to contribute men and material (not just money) to assist the U.S. in keeping the Strait of Hormuz open for the transit of oil and goods to and from the Middle East,” he added.

There are voices from within the United States that simply look at the attacks — regardless of the perpetrator — as more evidence of the problems with America’s dependence on oil, particularly oil that must be shipped through risky seaways. Robbie Diamond, President and CEO of Securing America’s Future Energy (SAFE), which advocates reduced dependence on oil as a transportation fuel as a national security practice, said last week in response to the news from the Middle East, “These latest attacks remind us of the instability and vulnerability of much of the world’s oil supply. The global nature of the oil market means that disruption anywhere affects prices everywhere–and nowhere is this more true than around the Strait of Hormuz, a chokepoint through which 18.5 million barrels of oil pass each day.

“America’s outsized dependence on oil to power its economy means we are continually exposed to geopolitical risk in the Middle East, from a nation’s instability to a terrorist attack,” Diamond added. “When incidents like these happen, it is U.S. consumers, businesses and the American military that ultimately bear the brunt, and provides us with a timely reminder that our economic and national security would be bolstered by breaking oil’s monopoly on the American transport system.”

“The navigation of the shipping needs to be protected ,” Schiff said, “and you could make an argument that even we didn’t know who’s responsible you need to protect [the safety of ship traffic] … from any bad actor.”